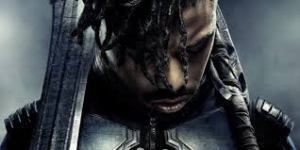 **Warning- There will be spoilers for Black Panther in this article BUT the movie is about to hit over 1 billion dollars in 3 weeks so chances are, you've seen it lol**

Killmonger is literally everyone's favorite villain. I havnt seen this much hype around a movie villain since Heath Ledger's phenomenal performance of The Joker back in 2008's The Dark Knight. Michael B. Jordan absolutely KILLED the role.

There are even people who want to go as far as saying that Killmonger was in fact the hero and T'challa was the "Bad" guy.

In theory, its all about perspective.

From the perspective of Erik Killmonger, he was essentially going to "Stick it to the man" and "free his people" from oppression. When you look at it from that viewpoint, then yes, he IS a hero.

The Black Panther can very well be looked at as "The Man".

And the uncomfortable truth about Killmonger is, his anger is entirely justified. In a strange way, he’s much more relatable to the audience than T’Challa will ever be.

T'Challa CAN be seen as the bad guy, especially in the beginning because of his PRIVILEGE. His Privilege and unwillingness to share his resources to those in need.

Before I dig a little deeper into the significance of his character, first lets understand exactly what Killmonger's plan was.

Killmonger was a native of Wakanda who grew up in the hood in Oakland, California after his uncle, the King of Wakanda, killed his father.

Unlike all the other Wakandans, Killmonger had to grow up fatherless and oppressed in America, due to a senseless killing by a person in power. A trait that many young black boys and girls have to experience.

Killmonger is the embodiment of the pain caused by this opression. He grew up with anger in his heart. A anger that carried on into adulthood just like with many oppressed black people.

Killmonger's plan was to arm black people all over the world with advanced weaponry in order to overthrow their opressors.

In laymans terms, He was Malcolm X against T'Challa's Martin Luther.

To be frank, I believe this is why so many black people resonated with the character. He seemed to be fighting FOR us, whereas T'Challa didnt at first see a responsibility to help other black people when he has the means to.

I know not EVERY single black person has this fantasy, but , I can gurantee you that the idea of a revolution taking place where we conquer our opressors sounds pretty dag on dope to most black folk.

Thats what made Killmonger one of, if not THE best Marvel Villain. He's relatable and his intentions are understood, even if you dont neccesarily think their right. You FEEL for him. He even sounds 100% right, at times.

The complexity of the character was amazing, Iconic, and worthy to be talked about.  The significance of the character is deep, and I hear there are even college courses that are being made surrounding the ideologies based in this movie.

The aspect to the character that indefinitely DOES make him a villain is the fact that he's willing to kill anyone who gets in his way, to achieve his goal. (even his own girlfriend). Also, the fact that he wants to CONQUER white people , is a problem. There should be a balance to where I feel the goal should be to live in unity, not conquer our oppressors.

So, because of all of these different traits, I want to go ahead myself and in conclusion, call Killmonger an anti villain.

An Anti-Villain is a villain with heroic goals, personality traits, and/or virtues. Their desired ends are mostly good, but their means of getting there are evil.

thanks for tuning in, I hope i provoked some more thoughts on the character that can induce a real life discussion about the topics at hand.

Peace and much love to All!

More in this category: « EPK's: Do artist still need them in the coming generation? Logic Hits #1 With New "Bobby Tarantino II" Mixtape [ Mixtape Review] »
back to top