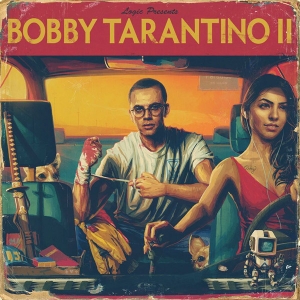 After having a 2017 full of mainstream success with his Hit Album “Everybody”, Logic is back on his Rap ish, with his “Bobby Tarrantino II” project. Being the sequel to his 2016 Bobby Tarantino tape, Logic ditches “Album Logic” to Let “Mixtape Logic” shine.

The thing I like most about this project is how self aware it is. This self awareness is at it’s peak with a Intro from Popular Adult Swim Icons, “Rick and Morty”, explaining the difference between the two types of Logic. Quotes like “I’m in the mood to turn some $h!t up Morty! I’m not in the mood for a message about how I can be whatever I want,etcetc” lol.

This epic intro to the mixtape immediately sets the tone for what to expect. The project isnt one of Logic’s deepest most thought provoking tapes. It’s not meant to be , though. Coming off of a great year including a EPIC Grammy performance, the majority of the tape finds Logic spitting braggadocio type raps about his success, his lifestyle, and his team. The thing I find refreshing about Logic, though, is that even on his “Turn Up” songs, he tends to keep lyrics such as “If they tell you money make you better than others, then somebody lied” on his projects. It’s a hype record that gets people moving and excited, but the lyrics still stay true to who Logic is as a artist.

The mixtape also has some stand out features like the track “Indica Badu” featuring Wiz Khalifa. Logic and Wiz sing and rap about the herb in a “Kush and OJ” Era type weed anthem.   Another stand out feature comes from Big Sean on the song “Wassup” where you find the two rappers going in with the bars and word play.

Logic definitely dropped this one off for his fans specifically, and for him to have been singing so much lately, it’s nice to hear Logic have these long winded verses on these songs too, where we get to here the DMV Native flex his lyrical abilities. We get to hear Logic do what Logic does best.

Overall I say it's a solid mixtape and addition to the catalog Logic has ammassed thus far. First week sales are in and "Bobby Tarantino" is sitting at #1 with 119,000 records sold. Congratulations to LOGIC on another W and we'll be looking forward to the Everybody/Bobby Tarantino tour!

Stream the project via the link below!
"Bobby Tarantino 2"
https://twitter.com/Logic301
Best of Logic: https://goo.gl/Qdu2t8
Subscribe to his Youtube here: https://goo.gl/iBgSrs