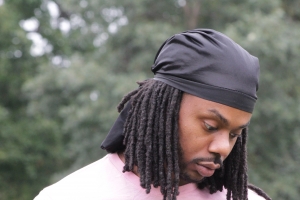 Where many would say living in big cities like NYC or LA places them in an advantage over others, hip-hop artist, Xavy Rusan says being from a place no-one has really heard of, gives him the advantage.

Good point. Referring to where he’s from, Davenport, Iowa, apart of the metropolitan Quad-Cities, Xavy Rusn said he could only speak for the eastside and not the west side of Iowa, but mentioned that opportunities and fan bases were mostly geared toward Folk and Indie Rock genres.  So as a hip-hop artist from Iowa, “you got to pave your own way”. To him, this differentiation is a plus and opportunity to stand out. He went on to say that there wasn’t yet, a pioneer in rap, no one in the hip-hop community really speaking for them.  This lack of representation in rap, along with his older cousin, were his inspirations for getting into music back in 2013--the same year he released the video for his single "The Christening".

As passion drives us to fulfill a need, his was being able to be that voice in hip-hop for his hometown, for Iowa, for the middle of the map.

As I wasn’t finding any luck or substance via Facebook Open mic events for the time I was going to be in town, I turned to searching for artists via hashtags on Instagram and Twitter.  This is how I found Xavy Rusan.  I was diggin’ as I did in every city I went to, and I found myself listening to his projects from 2016 posted on Paste Magazine.  His confident swag in his tone, thought-provoking and visualizing wordplay with that southern-authentic hip hop vibe, had me like “OK IOWA!”.  The vibe took me bobbin' to his YouTube and Soundcloud. He got some hits coming out the middle of the map! Quad City Times even listed him as one of the top 5 local artists playing 'the soul of Quad Cities'.

So what should we look out for from Xavy Rusan moving into 2019? A continuation of his catalog of good hip-hop.  According to Xavy, projects, collaborations, and a lot of visuals.