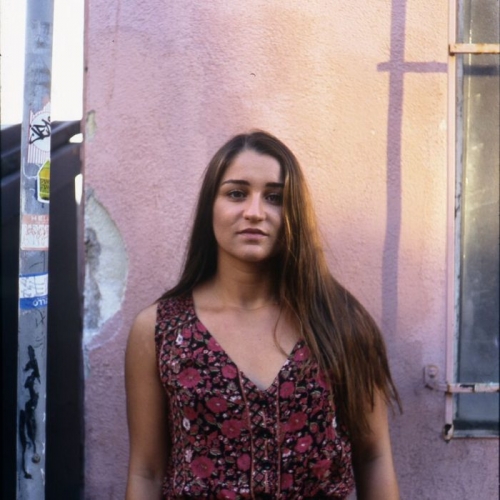 She has one of those voices that will make you stop doing what you're doing, making you fall into the beauty of the sound she creates.

Lamusicblog: Kiki Halliday’s angelic, breathy vocals and simplistic, yet universally reaching instrumentals immediately reels you in. Her songwriting is intimate, yet shrouded in a somber beauty that invites the listener in rather than alienating him or her with overly complex arrangements or technical implementations.

It’s songwriting akin to her influences such as Fiona Apple and Jenny Lewis, and it’s a breathe of fresh air in an LA music scene encumbered by DJs and electronically driven artists. The singer-songwriter grew up in LA knowing that music was important to her, but it was a gradual ascension toward discovering her passion for it.

Jillian Goldfluss from LAMusicBlog spoke with the budding musician about post-college life moving from the suburbs to the sprawling LA metropolis and pursuing her artistic aspirations, day by day...Read here. (source:lamusicblog)

Kiki Halliday is a singer/songwriter based in Los Angeles. Her music pulls together different aspects of blues, pop and soulful sounds to create something that is bright yet vulnerable. She is a lyricist to the core, however she maximizes her sound by pairing uncomplicated chord progressions with words that will take ahold of you, willingly or not, and bring you down beyond the surface. Her live set has a noticeable easygoing, Southern California vibe as she plays the guitar well and interacts with the crowd in a way that’s honest and whole-souled.

Kiki released her first complete work, “The Love Notes EP”, in November 2014. “Love Notes” was recorded in its entirety with Scott Frankfurt (has worked with Whitney Houston, Barbara Streisand, John Legend) at his studio in Woodland Hills, CA. What’s interesting here is that Kiki can move fluidly across genres without seeming too bound to anything. This has allowed her the opportunity to work on projects including a collaboration with LA producer/DJ Matt DiMona on his debut EP, Up All Night, where she co-wrote and sang on the synth, R&B infused track, “Next 2 U” and another with Philadelphia-based hip-hop artist and rapper, Frzy, on his upcoming album God King Slave.  Her music has also been featured on the TV show The Young and the Restless, and her song “Beautiful Soul” will be included in the upcoming motion picture I’m Not Ashamed, due out in theaters October 21st.

Kiki continues to put on live shows in the LA and San Diego area- depending on the night you may be able to catch an intimate acoustic session or hear her music come alive during a set with her bandmates. There are melodies coming out of this young, raw talent that may land anywhere and that’s what makes it exciting to see what she will do next. (source:kikihalliday.com/about/)