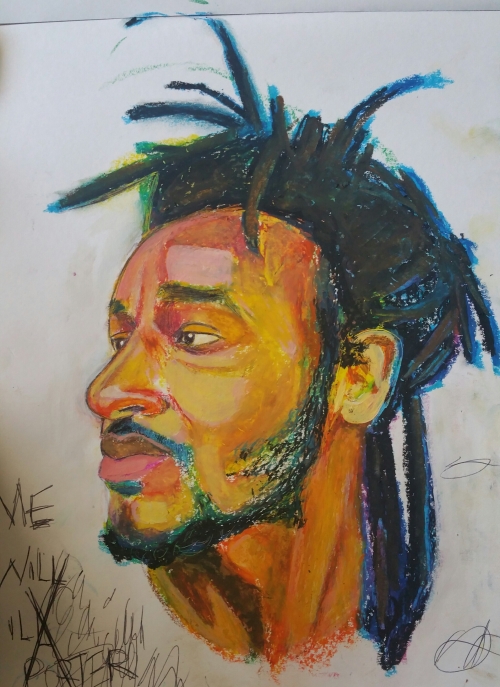 Before releasing this project however, this man has been working.  Within the span of only a few months releasing a few projects back to back, also containing straight - for instance 'Back to Basics'. I think those 17.9k listeners agree as well.

Will Porter is a multidimensional visual and performance artist. His strong knowledge of color, form and movement allow him to create moments that transcend the physical piece itself. His acrylic and oil pastel works both exhibit an overstanding of line manipulation that suggests movement, allowing the observer to navigate throughout them and experience something new in each direction. Building such a solid foundation in art allowed for these same attributes to permeate into his music and poetry. He has an innate storytelling ability, directly reflective of his ability to paint such vivid imagery, driven by a cadence reminiscent of his brush strokes. Ranging from sporadic to disciplined, as to create a controlled chaos.

Will was born and raised in Flint, MI. Being a sponge in such a vibrant and dynamic city as Flint in the 1990's, it's no wonder that his passion for art sprouted at such a young age. Will, affectionately known as Junior by family, began drawing at the age of 4. He was under the study of his older brother, Jeremy Cooper. Jeremy being very skilled in pencil and graphite, would instruct Will to recreate many different video game and cartoon characters. including, but not limited to, Mortal Kombat, Teenage Mutant Ninja Turtles and Super Mario Bros. This addition of technical drawing to his infinitely creative mind birthed a black and white framework that he was eager to fill with color. He took every art class available in school from first grade to freshman year in college.

In 2001, Will and his family moved to Stafford, VA. The significant contrast in scenery and aesthetic was yet another catalyst of growth for Will's creativity. His medium of choice shifted from tempura paint, to the more robust oil pastels, and oil and acrylic paints. He was able to transform his formerly flat, and one dimensional paintings into pieces that showed great promise of form and depth. Will worked tirelessly on projects both in and outside the classroom so that he could sharpen his talents.

In 2009, with encouragement and a letter of recommendation from his high school art teacher, Stephanie Athanasaw, Will was accepted into the VCU School of Arts program. He was quickly humbled by the advanced and ambitious work of the students there.Being forced to adapt, Will met the challenge head on. Excelling at times, while failing with confidence at others. His time at VCU would be short lived due to financial woes, but even after returning home to work, what he'd learned on that campus, remained in him.

He continued the path of self improvement, pushing the limits of his gift with each new piece he created. Creating works that were more personal and without parameters allowed for Will to extend his total body of works to upward of 500. He has been quoted as stating "...art became so fluid for me, to the point where it's easier most times to communicate through paintings than through words." This surgence of work catapulted Will to becoming a standard in the culture of art and not just a student. Needing a larger platform to showcase his large catalog of work, Will made the transition from Virginia to New York in December of 2015.

Since being in the big city, Will has landed full time employment as a dog walker while juggling art, music and poetry into all the time in between. He has worked alongside musician/curator Steff Reed in shining a light on police brutality and systematic oppression, collaborated with actress/vocalist and cinematographer Angelica Jackson in the creation of her groundbreaking docuseries "The Grind BK", while also making his presence known in multiple venues throughout New York; either by opening up the space with his artwork, or commanding an audience with his music and poetry.

One of those spots being Brooklyn's own Backdrop. A venue that focuses on providing the space and a welcoming environment for creatives to come inspire and be inspired. Will is only just getting started, so to avoid missing his amazing journey of self exploration, be sure to use the links available on this site to familiarize yourself with his social media, soundcloud, art gallery and more. Since I've caught you up to speed with the artist, I'd like to introduce myself. Hi, I'm Will Porter :) welcome to my page. Explore it with open senses. - Will Porter

More in this category: « April Oneill Faith and Brutality (F.A.B) »
Login to post comments
back to top