SUMif brings more of her feel good vibes on "Walking Away" 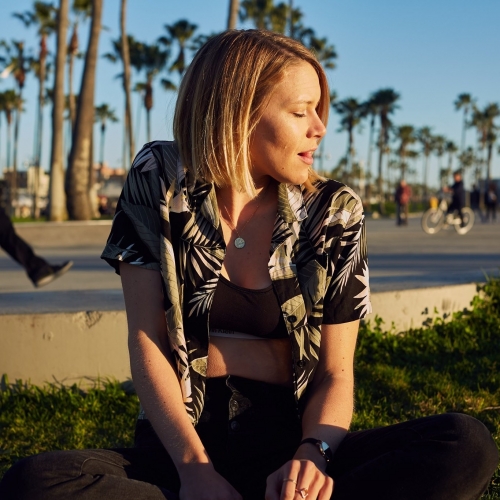 SUMif is the alias of Steph Wells, a singer-songwriter based in San Francisco. Her moniker is derived from an Excel function and is a nod to Wells self-described inner nerd. Wells’ uplifting music during these turbulent times has gained footing among a growing fan base. In her first year alone, Wells managed to land on two of Spotify’s highly-coveted New Music Fridays and gained over 1.5 million streams. One of her early singles, “Lay Down,” skyrocketed up the HypeMachine charts, quickly hitting number 1. She continues to make a name for herself, writing, producing and performing all her own music. So far with 18 singles and two EPs under her belt, Wells is releasing new music with “Walking Away,” via Dancing Avocado Songs, the latest offering from the electro-pop songstress.

On “Walking Away,” meandering piano melodies courses through this track as sizzling beats and ambient synths add an ethereal vibe. Wells surges through this song with her dynamic vocal abilities. The track felt very invigorating with a smooth vibe coming from the vocals. The pop soundscape proved dream-like, revolving around glitch-y electro vibes and buoyant beats. As the mellow vibes wash over you, you will feel yourself begin to get carried away by the music. I definitely felt transported to a different time and place by the moving sounds.

Wells shows through her good vibes, smooth vocal deliveries and dynamic music that she is a contender in the industry. Motivating listeners to seek out more of her work, her music not only moves, it offers the feels to get you going through your day. Luckily for audiences, Wells is about to release her new album In Transit, geared up for release October 23rd. “Walking Away” is a cut off the debut album, a project that according to Bongminesentertainment.com “finds SUMif inching towards equilibrium after a whirlwind romance and a rousing awakening.”

“Walking Away” was written by Steph Wells and Nicole Weisberg, produced by neek and mixed and mastered by David Burris (Saro, RKCB) at Mateo Sound.

SUMif · Walking Away
SUMif's "Walking Away"
More in this category: « Misty Mtn takes "Robots in the Trees" head-on Isanna conjures her dark side with "I Wear Black" »
back to top