Interview with an Artist: Keeping Engaged in Isolating Times 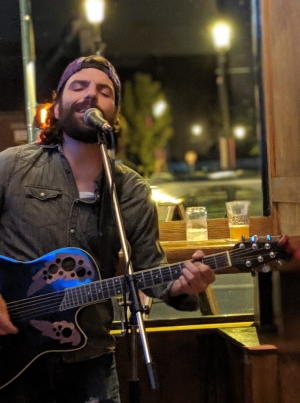 Frank Liston is always ready to perform live as he showcases his talent. @franklistonmusic

Diversal dives in with up-and-coming singer and songwriter, Frank Liston on his current music practice during the Coronavirus and his future endeavors.

Musicians have been exploring ways to keep motivated to create and inspire others with their music after public venues have halted live shows due to the Covid-19 outbreak. This week, Diversal interviewed an up-and-coming artist from the Northwest Chicago suburbs to understand how he’s handling the temporary halt in musical opportunities.

Frank Liston, an Elgin, Illinois native, writes his own music, sings, and plays acoustic guitar within the Chicagoland area. When he’s not busy creating his own music, Liston plays acoustic songs of popular hits for crowds. “I enjoy playing soulful acoustic renditions of popular favorites from all eras and genres of music,” Liston said. His music is inspired by folk, blues, and R’n’B tunes.

As a young child, Liston started to play music by ear. Music eventually evolved from a hobby to his passion and career. 20 years later, Liston continues to create music and entertain others with his tunes. In the early 2000s, Liston performed his first live gig. After overcoming some stage fright Liston found he felt a rush of excitement performing his music in front of an audience and he never stopped performing after this show. In 2017, Liston released his first solo album, Renovare. The album features Liston’s iconic sound inspired by the aforementioned genres.

Liston finds that during the stay-at-home orders it’s been harder to tap into his creativity to create new music. After all, shelter-in-place guidelines have dampened people’s moods with the halt of public gatherings, discouragement from spending time away from home, and inability to secure income with the shuttering of music venues. Liston used to perform regularly but has since had to stop performing for crowds due to the virus. Since Liston is not scheduled to play live anytime soon he finds staying motivated to practice his music at home to be a challenge. Of course, distractions at home such as Netflix are hard to resist, but Liston has been practicing nevertheless.

When the pandemic spread to Illinois, Liston considered posting his music via Facebook Live, but realized that wasn’t the right path for him because so many other artists had the same idea. Liston wanted to promote himself in a different way.

One spike in Liston’s motivation resulted from a home project involving other musicians. This project involved a collaboration with other performers to create a cover video. “That was super fun. Despite not being to physically be together it was great to see that music can bring people together in times of need,” Liston said. “The video collaboration was how I was able to be creative and show off a few of my talents.”

Indeed, people across the globe, trapped in their residences from the disease, have been creating music to stay connected and keep up their spirits. In Wuhan, China, the site of the breakout, people have been chanting and singing fight songs from their apartment balconies to beat the isolation blues. Other citizens in cities across the world have also joined in nightly.

Recently, Liston was able to secure a gig to play his music live in front of a small audience in Elgin. Liston was beyond excited for the opportunity to play after a two month hiatus. Liston was grateful to acquire income from his show. Afterall, Liston’s main source of money comes from his live performances. “By the end of the show, my fingers were hurting! I haven’t felt that feeling in two months and it felt amazing,” Liston excitedly said.

According to Liston, the Chicago-based band, Waxworks, hosts weekly psychedelic jams at the popular bar, Moe’s Tavern. Musicians, including Liston meet there weekly to create music. “I miss them and the jams!” Liston said, as he looks forward to Moe’s reopening as soon as Chicago allows it. Currently the venue is closed due to the Coronavirus.

You can find more information about Liston via @franklistonmusic on Facebook for upcoming shows.

Read 153 times Last modified on Sunday, 07 June 2020 23:01
Tweet
Published in Interviews
Tagged under
More in this category: « Interviews
back to top