Lil wayne: Mixtape Weezy Is Back and Hungrier Than Ever! [D6: Reloaded] 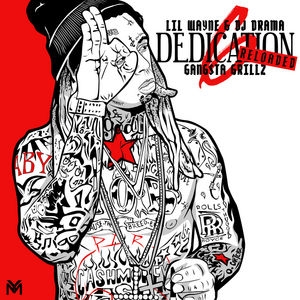 So Ive mentioned in my previous post about how much of a fan I am of Lil Wayne. So I HAVE got to talk about his newest mixtape, Dedication 6, that was released a few weeks ago.

Mannnnn, my boy Weezy sound hungry again!! NOW THIS YOUNG BLOODS IS WHAT YOU CALL A OG. I've always been a advocate of Wayne,hardcore. Lil Wayne from about 06-11 had one of the greatest HipHop runs of dominance in HipHop history. These are facts. People these days be trying Play Wayne like he's washed up and this and that and the third. I've BEEN saying , nah Bruh Wayne still dope. It's all his label BS holding him back. Kids these days don't even know how great Wayne was in his prime , but Bruv never lost his skill. Never been washed up. Wayne isn't even in my personal top 5 rappers list, But I still respect and recognize him as the greatest rapper from the Millenial generation. Think about this; if hypothetically speaking Wayne was shot dead right after The Carter 3 dropped, then we without a doubt in my mind would have immortalized this man. We woulda been making sure that when you mention Tupac and Biggie, Wayne's name is ALWAYS Mentioned too and those 3 names would have been synonymous . Biggie, Tupac, and Wayne.

That didn't happen, thank God. The point I'm tryna make is that once he hit the label problems , it's like all he achieved didn't even matter anymore in the public eye . All the public perception of him was that he sucks now, he's washed up, etc etc....

Well now after giving his project a thorough listen for a few weeks, I have to say, BRUH!!!! Though Wayne never left, my guy Wayne is BACK!! I believe THIS is the project that will be the turning tide for his career. I believe Lil Wayne is about to reinvent himself once again and a new flourish of greatness will be bestowed upon his career! People are about to start puttin some Respek' on his name ! D6 has a Wayne that's duckin in and out of metaphors, wordplay, &sauce. Wayne over here spitting bars that will make u scrunch up your face, put your fist to your mouth, and say D*MN !!!! lol Bruh, this mans is so clever yo. He sound like the 06 mixtape Wayne on modern beats , Bruh ! It's crazy. The best rapper alive is back to remind y'all , true talent never subsides on some space jam type ish. Some might think he finally touched the ball and got his powers(skills) back.I knew big homie never lost em.

Yes, that was a space jam reference lol

So, after dropping off "Dedication 6" around christmas time, he is preparing to release a new version with more songs, entitled, "D6: Reloaded".

Earlier this year, He dropped off a remix to the popular JAY-Z song, "Family Feud", featuring Drake. The song is reminiscent to how Wayne and Drake used to trade bars almost as long as 10 years ago!

No Hook, straight bars. Yesterday, Wayne dropped off a second offering from the reloaded mixtape and again we have Wayne straight going IN with the bars.

The song is called "Big Bad Wolf" and it sees Wayne rapping for 4 straight minutes over Blac Youngsta's "Hip Hopper. Something I found interesting about the song was that one of the criticisms Wayne gets is he raps about drugs and drug use too much. I listened to the song and I litterally could only catch one line referencing drugs. The rest was just straight bragadocio bars but they were clever and entertaining. I'm hoping that when The Carter V drops, we can hear some more meaningful music and genuine music detailing what has been going on in his life since the label issues came about.

For now though, I am MORE than Happy to hear the mixtape version of Wayne doing what Wayne does best...and that is RAP.

Definitely looking forward to the reloaded tape and whatever else this new revamped HUNGRY Wayne has to offer!

Just wanted to let yall know that Wayne just dropped off ANOTHER record from D6:Reloaded featuring Juelz Santana and its another song of straight barz! Im telling ya'll Wayne is HUNGRY again! sounding like the early 2000s mixtape weezy 100 percent and even linking up with his old patna!

Wayne was tired of yall playing with his name and calling him wack, I swear!