Kodak Black: A talented kid, thats simply too "Hood" for the industry 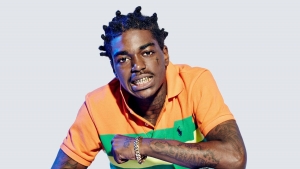 I'm not going to lie. For a little bit ya'll, I was stuck in my ways. I was literally stuck in the years between like 2006 & 2011. I was in high school and then my first two years of college then. Around that time period is when I REALLY

1. Got heavily into being a music junkie. I used to LOVE artist like Kanye West, Lupe Fiasco, Lil Wayne, (06-10) and then Kid Cudi, Wiz Khalifa, and Drake (09-11). There are a lot of other artist I liked a lot, but they were my favorites.

2. Then around 2010/2011, I started getting into making music myself and the time period that I did so is super important to my art.

For a long while after that, I was simply stuck in that era. 2013 was one my FAVORITE years for music but 2012 and all the other years? WACK

I cant stand all this mumble rap mumbo jumble ish! With the exception of artist like kendrick and chance the rapper for example, I just couldnt get jiggy with this new wave being ushered into the 2010s. (I have no idea what to call the teens lol I guess thats right ha)

They all sucked! at least in my opinion lol

I prejudged a lot of these artist and decided that because they didnt sound like kanye or cudi, that they were wack. I didnt even have to listen to the music, I heard a couple of snippets , and then was like nah ef this. These new N!gg@$ are lame. TRASH TRASH TRASH.

Then something happened around the beginning of 2017. I realized, I was being a hater. lol

and while yes, many of these new school rap cats ARE TRASH lol Not ALL of them are. Some actually have some really dope music.

Kodak Black is another new school cat who I really really like. He has such a distinct voice and vividly paints pictures of being a hood cat basically. I WANT to see him win. His lyrics have substance and he's not a dumb dude, intellectually.

That being said, my mans STAY making bad decisions.

Kodak Black IS the poster boy right now for when a rapper is simply too hood for their own good.

In the past 2-3 years, Kodak Black has been arrested and caught charges on things ranging from sexual misconduct, Gun charges, and marijuanna possession. Every time, the judges would give him a break, and he seemed to STILL never learn his lesson.

Kodak Black has been on house arrest for the majority  of 2017 and was looking to make it out at some point in 2018.

But then he got arressted AGAIN. From His House!!!!

My mans Kodak Black was posting instagram live videos, while having his boys toting guns and rolling weed in the background, in front of his SON at that!

BRO! c'mon now. You gotta do better! He HAD to know that the feds would be keeping tabs on him. They dont wanna see him, win.

He even states in one of his most popular songs, "Tunnel Vision"

That makes me aware to the fact that he knew! So what was his excuse for this ill behavior? There is none , other than the fact that Kodak Black is just too hood for his own good.

So for everyone out there with the hashtag #FREEKODAK, I cant support that notion. Kodak Black may need to do some time in the pen because all the breaks hes been getting before have not phased him.

He's also young. At 20 years old, hes being a kid. Thats what he is. A kid still.
But when you out here trying to live like you grown, then you gotta face the consequences.

I look at people like Gucci Mane who went to jail and came out a new man. Gucci not bout that hood life anymore. He has a wife now, he cares about his brand and business. You can be a street dude without being a hood dude.

The difference is hood dudes commit crimes, whereas street dudes have that connection to the urban world, but no crimes are being committed. A street dude has honor and grinds and works hard and hustles but his hustles are legal. Street dudes move smart! so if they are involved in some criminal activity, their not going to be blasting it on instagram live.

I really dont want Kodak to go to jail for a extended period of time, but it is NOT looking good for him right now. It just may be the wake up call he needs.

When the police raided his house, they got him for 2 weapons , marijuanna possesion, and child endangerment charges.

Hes looking to face at least a couple years in Jail.

I look at somebody like Meek Mill who is in jail right now and I really DO think there should be a free meek campaign. Meek Mill is in jail for popping a wheelie and breaking up a fight.

Yes, he broke his probation, but he was on probation for something he did upwards of 10 years ago! thats rediculous. Meek had been trying to turn a new leaf over in life and be a mature law abiding citizen, and they really got him on some petty stuff.

Kodak though? I do believe that whatever sentence he gets, he definitely has it coming to him.

Lil bro HAS got to move smarter. We shall see how this plays out. Hes rich and has a good lawyer probably, so lets see if his lawyer can finagle his way outta this one. We shall see, we shall see.

Thanks for your time as always !

More in this category: « Where in The world is Kanye West? Lil wayne: Mixtape Weezy Is Back and Hungrier Than Ever! [D6: Reloaded] »
back to top