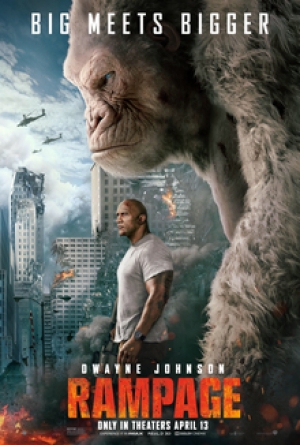 "Rampage" is a monster film based upon the 1986 arcade game of the same title.  RAMPAGE was succesful through the 90s, having a whole video game franchise based on the property. Growing up, I LOVED playing this game. I  had a feeling it was only a matter of time before it was turned into a movie, given the success of other 80s and 90s noastalgic properties such as TRANSFORMERS, POWER RANGERS, and TEENAGE MUTANT NINJA TURTLES.

There are similarities and differences between the film and the arcade game. One of the major differences is how the monsters are created.

Another difference between the two is that the Ape, George, is an Albino Ape. In the arcade game, George is a big brown ape. This works in the audiences favor because it distinguishes him from the most famous oversized Ape, King Kong.

A similarity between the two is the style in which the city is destroyed. It was impressive to see how the film makers emulated shots from the game into the film.  Another similarity between the two is the plot. The film's plot, much like the game, is about a group of monsters who are out to destroy a city and they have to fight against the police and military to do it.  I won't go into too much detail as to how it all comes together due to spoilers, but it does come together well to make sense.

Starring Dwayne "The Rock" Johnson, he once again proves why he is the biggest action star of the current generation. His charisma and charm shines in this movie as Davis Okoye, a Primatologist who is a bit of a loner and would prefer to hang around animals, rather than people.  The supporting cast includes: Naomie Harris, Malin Åkerman, Jake Lacy, Joe Manganiello, and Jeffrey Dean Morgan.

The relationship between George and Davis is a highlight of the movie. The ape ,George, never speaks in the scooby doo sense of animal talk, but he was communicative the entrie movie. He spoke in sign language and body language. We as the audience always knew what he was saying. Another highlight of the movie is the awesome monster fighting! As a fan of monster movies, I have to say this was some of the best monster fighting I have seen on the big screen, in my opinion! It was like watching a wwe match go down between giant monsters in a city (lol).

I wasn't expecting a deep, thought provoking movie. I was expecting a fun, enjoyable movie, about monsters destroying a city and fighting each other and that's exactly what I got. That being said, there were moments that got emotional and I would like to say the movie had some heart to it as well.

On a ending note, I just want to say that I laughed in the theatre at the fact that one of the previews for the Rampage movie was another movie starring The Rock! I was thinking to myself like this man is really on his grind lol

Thanks for your time as always!