Cardi B Breaks The Internet With "Invasion of Privacy" [Album Review] 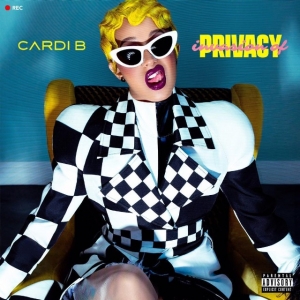 Popular New York rapper, Cardi B, is having one of the best weekends in Hip-hop in recent memory. The star, who broke into the industry last year with her Hit Single "Bodak Yellow" ,is proving to all of the naysayers that she's here for the long haul. Even after dropping hit after hit (Billboard source), there were people who doubted she could deliver a solid album. Cardi, throughout her come up, has been highly aware of the pressure to make a strong debut. If you peruse on through her social media, you can see that creating the album and making a good product was really stressing her out. Luckily, she had friends in the industry, such as J cole, to help encourage her (VladTV Source).

Well, I know that a weight has been lifted off the raptresses chest after all of the long hours and hard work, because this past friday, she dropped her album, and thus broke the internet!

There were a lot of factors that lead up to Cardi breaking the internet, factors such as : The fake beef with Nicki Minaji, The infidelity of her fiance, or the pregnancy rumors that turned out to be true having the big reveal on Saturday Night Live. It's been always something that consistently kept Cardi in the headlines. That being said, the ultimate reason that Cardi has been so popular is because of her charismatic, down to earth, personality. That and most importantly, the fact that her music is actually good!

You couldn't log into any social media with out seeing her face, this weekend! The whole industry is in support of and talking about her album (You can check out her instagram to see the full list of cosigns). People you would expect, such as her collaborators, Chance the Rapper & YG. But also, people you would not expect such as Oprah! I was suprised about the Oprah cosign because Oprah has a history of not being in support of rap and Hip-Hop artist.

The album starts out with the track "Get Up 10" which really sets the tone for the album. No catchy hooks or bubble gum lyrics. Cardi starts the album with straight up bars! The track is reminiscent to the popular early 2000s New York Hip-Hop Era where rappers like 50 Cent and Lloyd Banks would just hit us with the bars about living the street life and grinding to get what's yours. Following the opener, you get three Club bangers back to back. Drip featuring the MIGOS, BODAK YELLOW, and BickenHead. These type of tracks are stylistically more what she's known for and are strong assets to the energy of the LP. Following these tracks is when it gets interesting. Cardi's latest single "Be Careful" is a huge switch in tone as Cardi delivers a mellow R&B infused track about dealing with the infidelity of a lover. Following that, the Chance The Rapper assisted, "Best Life", sonically gives us a new sound from Cardi that we had not heard prior to the album.  Chance The Rapper's signature Soul Hop sound is all over this track, as Cardi raps about overcoming all of the adversity she faced to now be living her best life. In another switch in tone and Energy, track number 7, "I Like It" Ft Bad Bunny & J Balvin, is a reggaeton jam that will most likely have us dancing all summer long! Check out this hilarious video of DIDDY dancing to the song: Diddy Bop. This song, in my opinion, is so dope because the majority of it is in spanish, with some english thrown in the mix. Normally, its the other way around with songs being in mostly English, with some spanish words thrown in. I didn't know what they were saying but I felt it,though!

Track 8, Ring featuring Kehlani, is a relatable song about lovers who are growing apart. This being a song for the ladies, lyrics such as, "You dont hit my line no more, oh, you don't make it ring" are sure to be written in many tumblr post and tweets from women across the world. It's dope to see two popular woman artist coming together to make a anthem for their millions of fans world-wide. With all the beefs going on in Hip-Hop these days, its great to see the unity.

The following three tracks get back to the hype, turnt up Cardi that the world has come to know and love. Money Bag, She Bad, and Bartier Cardi are all bangers that are sure to be getting lots of radio play and club spins in the coming summer months. Cardi closes her album with two more songs for the ladies in "Through your phone" and "I Do" Ft SZA. The SZA feature was unexpected for me personally, but it ended up being one of my favorite songs on the record!

All in All, Cardi's debut is a strong record with dope features, a concrete concept, and greatly executed vision. I throughly enjoy this album and have many of the songs in my everyday playlist , now. I know the record hits even harder for the women out there.

I'm going to end on this note. Whenever I make a song and I say something kind of "sexist", I always hope that my female audience will translate it to relate to them, personally. For example, I have a line that goes: "Not trusting a B!t$h if She's Bad, But she's acting so basic" . I would hope that my women audience can relate to in the manner of, "Not trusting a N!gg@ if he's bad, but he's acting so basic".  Another example would be, "And If you act like a Douche, might take your girl up in the booth". I would hope that my female audience can translate that to something along the lines of : " and if she acts like a douche, might take her N!gg@ up in the booth" . I hope I'm making sense here, lol.

Basically, the point of me saying all that is because Cardi B has given women the opportunity to first hand have this same rapper mentality, but from a actual woman viewpoint. Lyrics such as, " I left that N!gga on read cause I felt like it!" and "Pu$$y so good, I say my own name during sex" give ladies acrcoss the world the confidence and boss chick mentality that Cardi has, thus having her audience live vicariously through her music.

I imagine this album is going to carry Cardi through the remainder of the year but I am definitely looking forward to when she starts making new music! All in all Id give this album a 5/5. From a statistical standpoint, Every song mattered and was entertaining and worth it on this record. There were no filler songs, or songs that you might want to skip, so that is my reasoning for rating it so high. However, thats just my opinion, though! Let me know what you guys think in the comments!